HTC needs no introduction, it has become a household name among Nigerians . Nigerians has embraced the Taiwan-based company with open arms.

Today HTC has joined the league of phone manufacturers that makes not only cheap but efficient tablets that will serve you well, last longer in terms of battery consumption, easy of use, strong and compelling design and above all very cheap and affordable.

Have it in mind that HTC as at today have a few number of tablets available in the market, they have not taken their time to manufacture and role out tablets just like they have been doing on phones and other gadgets. 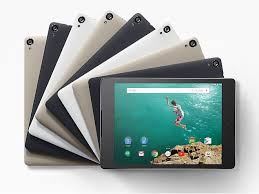 With the release of HTC Google Nexus 9 in 2014, marked the beginning of HTC tablets series, after that they went further to release Google Nexus 9 LITE

In this article we shall list some HTC products you really don’t need to miss out from if you really want to get a tablets for your self or love once today.

We are going to list some few HTC Tablets out there, let you know their RAM, battery size, internal storage capacity, ROM, screen resolution, processor and many other features.

This is a tablet phone you shouldn’t miss, this product was jointly produced by HTC and Google. Please note that this tablet run strictly on the Android operating system.

This product will serve all your need most importantly if you are a heavy gamers, it comes with a 6700mAh battery capacity with this you have no worry if there will be power failure or not as a single charge will take you the whole day.

Another feature that makes me to fall in love with this product is because of it 2.3GHz dual-core processor and it 2GB of RAM not only that HTC Google Nexus 9 LITE comes with a 32GB of internal storage with this you won’t have to worry your self about space as you will be able to download movies, video and many more applications.

Let’s give you the summary of what we have just listed above in a tabular form.

HTC Google Nexus 9 and HTC Google Nexus 9 LITE are almost the same, they where released at the same period but the LITE version is just an upgraded version to meet specific demands of customers. like customers who wanted to have much more space to download and keep certain apps running with out lagging the phone down.

HTC Google Nexus 9 is a little cheaper as there is a clear difference in terms of memory storage capacity between the both app.