ASUU has suspended its nationwide strike, after three months of industrial action.

According to Channels Television, the National President of the union, Professor Biodun Ogunyemi, announced this on Thursday during a press briefing at the Nigeria Labour Congress complex in Abuja.

The striking lecturers took the decision after a meeting with representatives of the Federal Government led by the Minister of Labour and Employment, Senator Chris Ngige.

In this article we shall be giving you all latest news on ASUU strike that started on November 5th and what is being done to bring the lingering strike to an end. 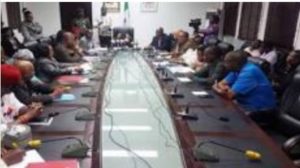 The results Of the outcome of the Nation wide consultation is out, majority of the universities voted for the strike to continue, most of the lecturers demands that the full entitlement be paid to the universities which they argued would raise the level and standard of University education in Nigeria but after further consideration they have asked the federal government to release just 50 billion naira and the strike will be called off.

Recall that the Federal government had earlier directed the accountant General of the federal to release about N15.4 billion to  universities.

ASUU has confirmed that the money has been paid to them but they are demanding for about N220 billion which they later asked the government to pay just 50 billion for the first trench. Remember that the Federal government owned about N1.1 trillion to all public universities.

The union has vowed to continue the strike unless the full amount is paid with out any deduction from it and they won’t shift grounds. Meanwhile the 2029 General elections is around the corner and ASUU has asked all lecturers and members of the union not to participate in the forth coming 2019 elections.

ASUU has carried out a nationwide consultation among it staff, they are asking member union to have a say if they strike should be continued or called off.

The voting is still on but results has already been coming out. So we are going to update this page immediately more votes comes up.  Remember that if majority of the schools vote against the strike ASUU will have no choice than to call off the strike.

FOR THE STRIKE TO BE SUSPENDED THE FOLLOWING UNIVERSITIES VOTED:

FOR THE STRIKE TO CONTINUE THE FOLLOWING UNIVERSITIES VOTED:

With the above details ASUU will have to convene a meeting among themselves to either accept or reject the federal government offer.

2019 The federal government will today have a crucial meeting with the striking lecturers. There is every hope that the strike might be call off today.

Leading the federal government delegation is the honorable Minister of Labour and Employment, Dr. Chris Ngige, Dr Ngige has pleaded with ASUU to please reconsider their stands for the sake of the student who has been at home all this while.

For those who is interested in finding out where the meeting will be holding should take note the said meeting will be taking place at Minister’s Conference Room. We are thee live covering the whole issue. We will like you to check back by 10pm today for update meanwhile the meeting started by 4pm this evening

Meanwhile read other information we have for you.

On 4th of January the striking lecturers will be having a meeting with INEC, they are meant to discuss issues surrounding the strike and how it will affect the general elections coming up this year.

Have it in mind that the strike will soon be over and you all will soon return to school, the government can afford to joke with the 2019 general elections.

On the 17th, ASUU and the federal government delegation held a meeting… In fact we were on ground to cover the event live.

The meeting started officially by 6pm yesterday being Monday 17th and as usual most of the government delegation were absent, this include the minister of education.
Although no resolution was reach. It seems the striking lecturers were really angry with the federal government delegation because they walked out from the venue before the meeting even ended.

There are indication that the ASUU strike might be called off on Monday being 17th of December 2018 but the federal government delegation and that of the striking lecturers couldn’t reach a resolution . Ngige who is the Minister of Labour and Employment made this known to news men shortly after the meeting they held last week.
This means that the Federal government has agreed to implement the memorandum of understanding it had with the striking lecturers.

The strike has not been called off as the dialogue has been adjourn. Remember that ASUU has been requesting for proper funding of about 1.1 trillion naira from the federal government and the implementation of the the memorandum of understanding they entered with the government.

The federal government in a desperate attempt to end the lingering strike is currently holding a mating to being December 10th with the leadership of the Academic Staff Union of Universities.
This meeting will be taking place at the Conference Room of the Minister of Labour and Employment.

They will discuss a lot of issues that has to do with the no-work-no-pay policy, recall that the Federal government has reinstated it commitment to invoke the provisions of section 43 of Trade Dispute Act T8 ( LFN 2004). If this eventually takes effect it means that lecturers won’t receive a dime through out the period of the strike.

The minister of labor and productive also stress the need for dialogue between the two parties,

10 days after the leadership of the Academic Staff Union of Universities went on strike, the federal government called for a meeting to end the strike, after much argument the meeting ended without a resolution to end the strike that has kept hundred of thousands of students at home.

ASUU vows to continue the struggle 2018

On the other hand the union has vowed to continue the struggle until the federal government comes to terms with them and implement all agreements and Memorandum of Understanding (MoU) they have reach before.

ASUU issue a warning to all lecturers 2018

ASUU has issued a fresh warning to all lecturers in all government owned universities to stay away from the class room, they should not in any way conduct any exams, test or even give any lectures or hold any meetings until they receive an instruction from the union body.

Parents and students have once again pleaded with the federal government to find a lasting solution to the constant strike that has paralyzed our education and also throw away students out of the class room.

Most of the parents that spoke to the news agency of Nigeria (NAN) argued that they struggled to cough out hundreds of thousands of naira just to ensure that their wards are kept out from the street which is filled with vices capable of destroying their future only for them to be thrown out by this strike.

Some of the questions we should ask our selves is that “why is it that our politicians send their children abroad? ” since they are our leader they ought to lead by example, but it seems they don’t trust our educational system here hence they send their children Abroad to study.

my humble opinion is that as long as their children are schooling in abroad things will get messy in the education sector.

What’s your take on this lingering strike we are experiencing today?