In this article we shall discuss in details about the Nigeria army salary structure, how much the Nigerian army earn or how much soldiers are paid on monthly basis.

We will also look into their ranks because without first understanding how the Nigerian army are ranked you will definitely get confused about how much they are paid. 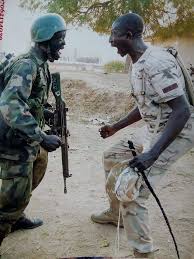 if you want to join the Nigerian army click here now

So If you are planning to join the Nigerian army or you have already gotten the form which is the first step into joining the army i will advise you to read this article from A-Z so as to understand the Nigeria army salary structure and also the Nigerian army ranks.

This article is written with the main objective of informing the public about how much tax payers money is used to pay those who sacrifice their life just to protect the territorial integrity of the Nation. No matter how much they are paid it is not still enough to equate the sacrifices they have made in the North East of Nigeria where they are busy fighting terrorism and other social vises.

Please note that apart from this salary structure we will list here today other bonuses are still paid, free houses are provided for them in the barracks and finally they don’t pay for electricity supply as civilians does.

Although there are speculation that the Federal government might have deducted this money from their gross income before paying them their net income. This means that the salary we are going to list down here today is the net income after every other deduction has been made.

The Nigerian remains the largest army in Africa in terms of their size, they have successfully increased in number from 18,000 to over 126,000 over the years,
This huge number has been attributed to their success in curtailing and handling the bokoharam crisis in recent time.

Before we go further we will like to divide the Nigerian army ranks into two categories which are :

They are as follows

They are as follows :

Although the above list may appear confusing, i have decided to present them in a well arranged format.

If you go to the barracks they leave separate on their own quarters.

Below we have successfully listed the the salary structure for noncommissioned officer of the Nigeria Army, carefully go through the Nigerian Army Salary Structure and Ranks below. All has been presented in a tabular form so that you won’t be confused

Important  fact you need to know about the Nigerian army

Hope this article is helpful to you? Please drop your comments below if you have any questions to ask

JAMB 2023/2024 Novel: Recommended & compulsory Novel to Read for JAMB Use of English

Jamb Novel : Do You Think Jamb “In Dependence” or “swee Sixteen” Novel Will Be Used for JAMB ?